When the words ‘mental health’ are mentioned, the subject is usually skirted around, especially in the North East. Generations of male industry workers have been brought up to not talk about how they feel, keep up the ‘tough man’ approach and keep going even when it gets too tough. But, working men (aged 25-54) account for the largest number of suicides by death in the UK. In 2017, the North East became the region with the highest suicide rate in the UK, with 10 people in every 100,000 committing suicide.

Organisations are finally being created to deal with the regional crisis of male mental health, including ManHealth. ManHealth is based in Shildon, County Durham but reaches out to those in need all across the region including Middlesbrough, Darlington and beyond. The support group was created by a local man suffering from depression, unable to face confiding in family or medical professionals – he confided in other men who also had the strength to open up about their depression. He created ManHealth to encourage men in the region in similar situations to speak out to other men about their mental health struggles. 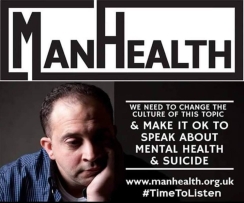 Paul Bannister from Shildon is the founder of ManHealth, and male mental health has affected him personally.

Paul: I have suffered with depression all my life. I had, like many ,failed to acknowledge I had depression and subsequently failed to do anything about it. In 2015 I became really ill, due to a host of life changing events. Marriage breakdown, redundancy, access to my daughter, family illness. Around the same time I met another man who had severe depression and I took it on myself to support him. I did this through listening to him and supporting him on a daily basis and it was during this period that I realised how beneficial this was for my mental health.

I then began developing the concept of ManHealth in late 2015. In 2016 I was awarded a grant from the Lottery and the Paul Hamlyn Foundation to conduct a feasibility study and complete a business plan. This took 1 year to complete and affirmed my initial thought that there was no proactive services available to men to prevent them from reaching crisis and then very often suicide.

Paul: ManHealth is a drop in centre so it is available to any man aged 18 and over. ManHealth is open to all men with mental health issues or men in recovery who require support.

Why do you think ManHealth is important for the local area?

Paul: I think ManHealth would be important across the UK. But traditional hegemonic masculinity and social issues make what we do imperative in this area of the country.

How can someone get involved with ManHealth?

Paul: People can get involved with ManHealth by sharing our posts on social media, enter one of our events, buy merchandise, make a donation and volunteer.

ManHealth have created peer support groups so men can get together and support each other through their mental health struggles, these events are free and confidential. There is no pressure to speak of personal issues. Although they can not fully cure someone’s depression and they do not believe they can, ManHealth groups are designed to encourage men to come together, to give and share support and steer people in the right way so they can seek professional help if that is needed.

Artist Grayson Perry visited the region as part of his All Man series for Channel 4. He met up with local cage fighters and those affected by losing a loved one to suicide. Hyper masculinity was tackled head on and mental health in young men was openly discussed. Along with local men, Perry created art inspired by the North East and male mental health, which was revealed in Durham Cathedral at the 2016 Durham Miner’s Gala.

There is a long way to go, but ManHealth are certainly one of the pioneers in tackling men’s mental health and suicide rates in the North East.

Don’t be afraid to speak out, seek help and encourage others. The time is now to tackle male mental health.

To find out more about the work ManHealth do, visit: www.manhealth.org.uk